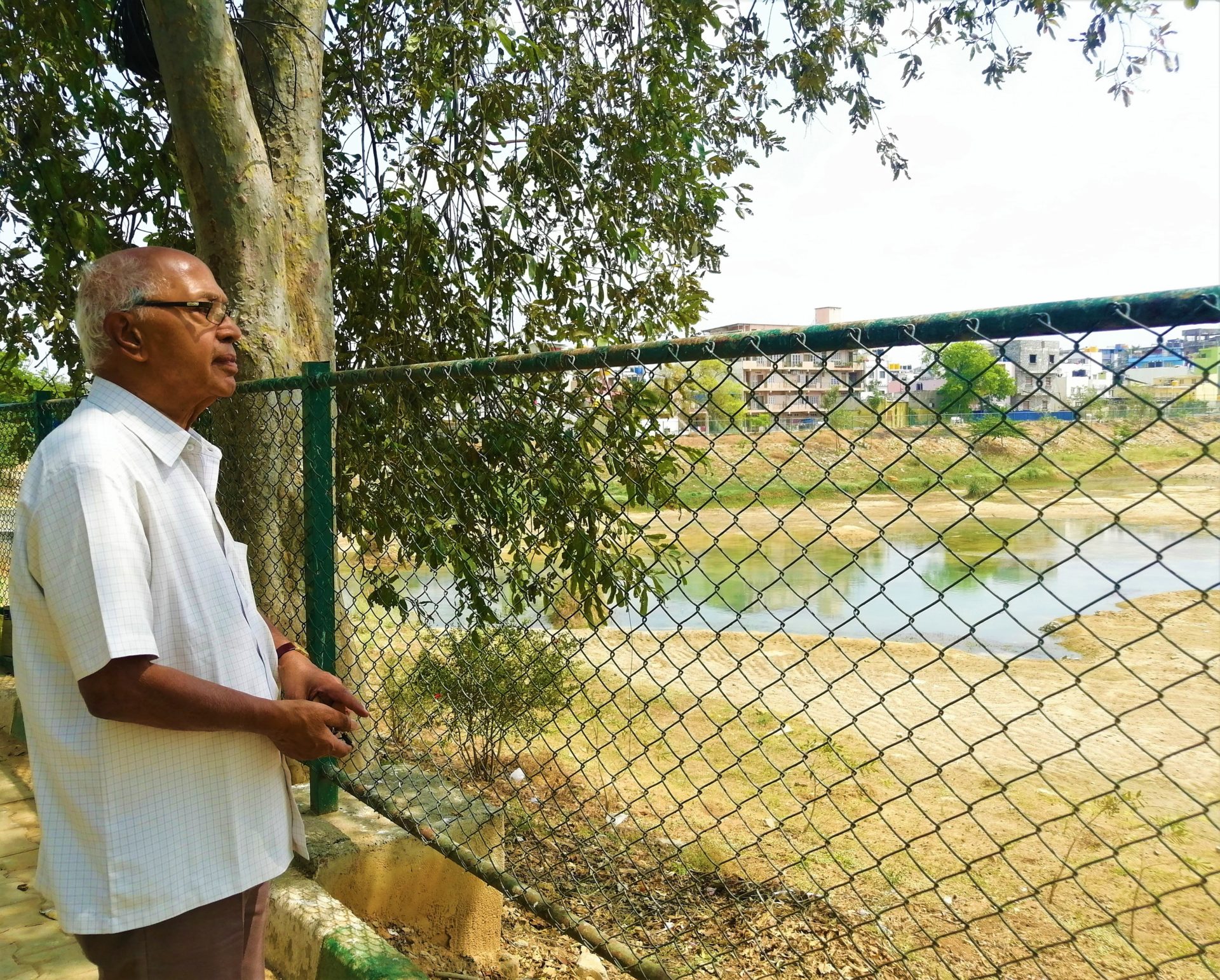 What makes a man fight for a lake for 20 odd years?

We set out to find the answer to this question from the 82-year-old Venkata Subba Rao who fought for the survival of Byrasandra Lake.

There must be some deep bond or connection between the lake and the person in question, surely. Maybe he grew up amidst numerous lakes. Maybe his childhood was spent next to a lake his whole life and had wonderful memories with it. Or maybe he belongs to a traditional community who has close ties with water bodies. Bearing these things in mind, I left home to meet him.

When I reached the lake, I was greeted by a dry expanse of land. Byrasandra lake was comparatively smaller in size to other large lakes of Bengaluru such as Ulsoor or Hebbal lake. It was a hot afternoon while I waited for him. Soon, I saw an old man walking towards the lake. I went up ahead to greet him and the eyes that met me were full of quiet determination. After due introductions, I blurted out the question that had been haunting me for a while.

Subba Rao answers me with a smile, "Well, the truth is there was no such special story behind it.â

Surprised at his answer, I asked him to elaborate. He was born in Doddaballapur where he attended his initial schooling where he does not remember being in the proximity of any lake. Then his family shifted to Ulsoorpet and even there, he did not have any rich experiences or memories connected to the lakes. He was definitely aware of the existence of the lakes in his area but thatâs about it.

Back in his office days as a senior manager at RBI, he would catch the bus home near the Sampangi Tank. Even back then, he says that the lake was in a bad shape. Now the lake is no more except a small bit which is preserved since the water from it plays a crucial role in the Karaga festival.

He finally moved to the Byrasandra Lake premise in the year 1977 where he built his own house. Every day, the mornings would be full of bird sounds and the chill crisp air could not be more oxygen-rich. When I asked him if it attracted people in the morning, he laughed and replied that the lake as a recreational activity is a recent phenomenon. Nobody could walk also as the land was marshy and rich in biodiversity.

But all of it disappeared in 1992 when the BBMP planned on shifting a slum to the lake. The lake was drained and the lake bed was readied to accommodate the slum dwellers. The residents, headed by him, filed a PIL in the High Court of Karnataka and obtained an interim stay against the Corporation. The Court ordered the Corporation to stop the filling up of the lake with debris. In 1999, the residents got to know that some people had filed a writ petition claiming the lake to be their ancestral property in1996. This was obstructed by the endeavours of the Subba Rao and his advocate friend at the Court. Then, as BBMP started fencing the lake, the writ petitioners resurfaced. Our man Subba Rao fought them again which ended with them being fined with Rs 5000 each.

In 2005, an even bizarre incidence took place. The lake was put on public auction by the Debt Recovery Tribunal (DRT). The lake had been offered as collateral security to a Public Sector Bank by a builder/developer in respect of a credit facility availed by him from the bank. This was again taken up by Subba Rao and his advocate friends at both High Court and Supreme Court and they finally won the case. The public auction results were declared null and void. This went on till 2011.

Then, the BDA took up the lake for development in 2013. Kere Habba was celebrated with much joy and vigour. In 2017, following some sewage issues, the lake was rejuvenated.

There is still development required at Byrasandra Lake. As they say, there is always room for improvement.

He says that this fight for the lakeâs survival would have been impossible without the help of his advocate friends Sarvashri G.S.Visweswara, Senior Advocate, T. Krishna, A. Madhusudhana Rao, and G.V. Chandrashekahar who successfully fought the legal battle.

So finally I ask you, my reader, why would anyone fight for a lake?

Simply because it is our responsibility to safeguard Natureâs blessings and preserve it for the next generation!