Lakes have always been the lifeline of Bangalore. Unfortunately, years of economic growth and population expansion have had their consequences Ã¢€â in as little as 40 years; the 380 lakes in Bengaluru have been reduced to just 81.

Wake the Lake is our flagship campaign that aims to make a difference by reviving the dying lakes of Bengaluru. This initiative is a strong demonstration of the collaboration between civic bodies, corporates, and citizens for the larger good. ThatÃ¢€â ¢s not all; the Government of Karnataka has been our biggest patron in supporting this initiative. Over the last decade, Wake the Lake has successfully reclaimed and restored over 20 lakes, which were on the verge of complete collapse. This process of restoration involved clearing them of sewage, improving the quality of water, greening the lake environs and turning them into active community spaces.

HOW WE DRIVE CHANGE

The revival of lakes transformed them into thriving ecosystems teeming with fish, ducks, and birds. These lakes have become a recreational hub for all members of the community as well. 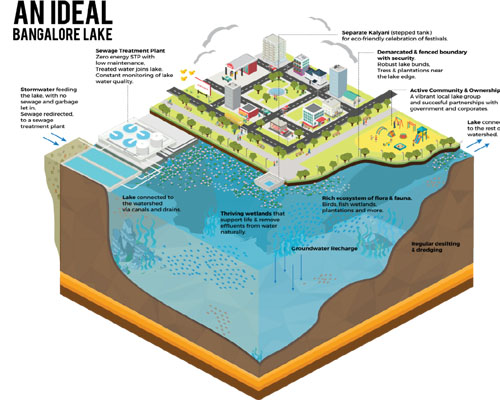