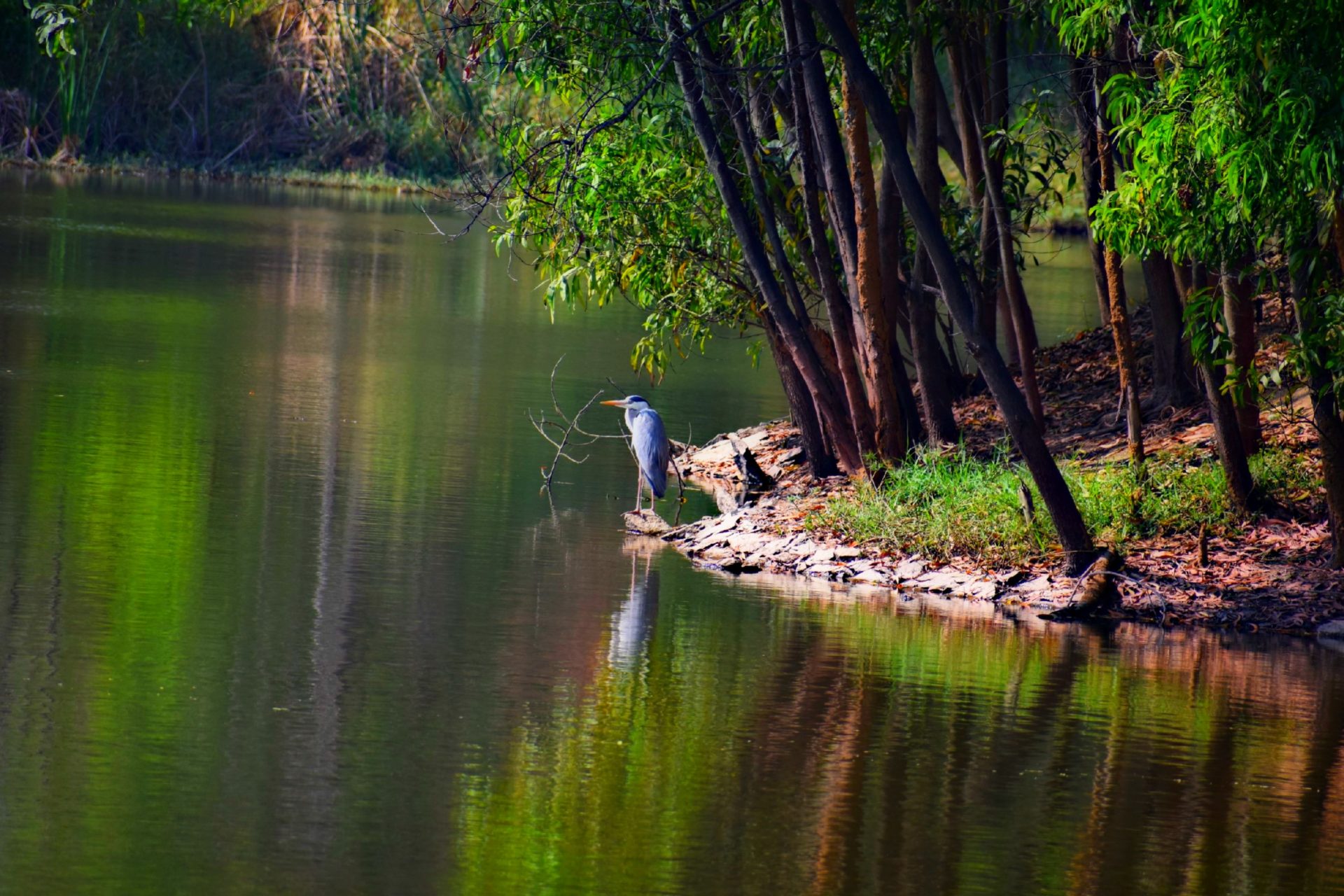 A water body, in its deep blue hues, brimming with aquatic fullness with vibrant fish and bird life.Ideally, the image in your mind would allow this water to be used for drinking purposes; if not drinking, at least direct supply for the potable uses of your households. Ideally, sewage and other harmful effluents would not be allowed into the waters and you would go jogging around the beautiful full lakes in the mornings before leaving for work. Ideally, your mind would not accommodate an image where the lake water ends drying up leaving only the bare lake bed.

This is indeed the ideal image that will pop up in your minds. But the overpowering reality is quite different and forces you to change your thinking.

Currently, most lakes are definitely not fit for drinking, even for potable use for that matter. Scientifically and historically, they are not solely meant to be water suppliers or as mere objects of beauty. And most lakes are never meant to remain full throughout the year. If they do, then it indicates somethingâs wrong unless they are perennial lakes. Intriguing much?

In this era of rampant urbanization, the whole meaning of what a lake is (beyond its technical definition) and its function in our society is lost somewhere along way.

Seema Mundoli helps us understand them a bit better.

She guides us through the changing dynamics of what the lake means to the local people, across the centuries. More importantly, she tells us of the almost-extinct connection between us and the water bodies.

All lake bodies house dense, living ecosystems. Reducing them to water containers is unjustified. In fact, many local communities, especially in historical Bengaluru, trace their roots back to the aquatic space of the lakes. The fact that their lives depend on the lakes implies more than economic reliance. Here, she sheds light on how the religious, social and cultural aspects of the local communities are intertwined with the lakesâ existence. Erasing the lakes is equivalent to erasing their histories and their very identity. In turn, these interactions between the local people and the lakes help maintain the water bodies, in terms of the quality and quantity.

The true meaning of nurturing Nature and its bounty doesnât mean fencing it off from all kinds of interaction and securing it in a cage-like setup. In the past, when the local communities used to depend on lakes for their sustenance, they had their own ways of giving back to nature too. They are essentially care takers of the lakes.

For instance, the lake beds of seasonal lakes that go dry in the summer yield a particular lake plant locally known as Honagone Soppu (Sessile Joyweed) which is harvested for food. With the stone pitching around the lake and the continuous flow of sewage water into the lakes, the lakes remains full throughout the year. This not only aborts the traditional nutritious soppu-rich diet of the surrounding local communities but also disrupts the life-death cycle of the lake.

If a lake is always full of water then, Seema warns that we should actually be worried, that it means it is full of sewage. One of her studies at Nallurahalli Lake showed the lake being full of water in May and June. The shocking revelation was that it was actually sewage water from the nearby hospitals. Due to this, the lakeâs character has changed, the size of water body reduced due to encroachment of its wetland while the lake has sewage waters choking life inside it. A perpetually full lake is not always good news.

Moreover, the seasonal lakes usually become full of fresh monsoon rains after summer but now the stone pitching impedes this natural cycling of water. The plants that grew and were harvested on the lake bed ready the soil with vegetation decomposed into organic matter for the monsoon rains. This process makes the incoming rain-filled lakes rich with minerals for its aquatic life. Yet another example of inter-dependency is when the local communities and domesticated animals cut through the dry lake beds in the summer. People drop fruit seeds eaten along the way and the animals, excreta â both creating organic matter in the soil. As can be clearly seen, a dry lake is good and necessary for its health. Modern rejuvenation methods hamper these natural processes where the lakes depend equally on the local communities as they do on the lakes. This way, the villagers gave back to the lakes by taking care of its health.

Intrigued, I asked her to elaborate on modern lake rejuvenation.

Everyone loves to see blue sparkling water surrounded by colorful blossoms. To get to these picturesque images, our modern rejuvenation techniques relies heavily on landscaping. The look of the lake is heavily stressed upon, especially to feed the imagination of the urbanized residents. Such motives can ruin the very ecosystem of our lakes.

Stone pitching and a soup-bowl design of the water bodies, two major features of modern lake rejuvenation, eat up the gentle shore line and the wetland surrounding the lake thereby discouraging shallow water birds and sealing off crucial nutrients that would ideally be sourced from the wetland to sustain lakeâs aquatic life. Seema says that restoring lakes is definitely needed but physical changes to modify its look is uncalled for and harmful to the lake. The aesthetic ornamental landscaping shuns the traditional trees that are usually found around the lakes. She reminisces about the old lakes on the outskirts of Bangalore where the ficus, Jamun and the Tamarind tree abundantly grow on the lake bunds. The Tamarind and Jamun trees are not favored by residents around lakes in our current times as they are said to drop on the road staining it and also the passersby. Only ornamental plants are planted around the lakes to make it colorful and pleasing to the eyes thereby changing the role of the lake in the society.

Milettia Pinnata, also known as Pongame oiltree. The seeds obtained from the Pongame tree through cold pressing is used as lamp oil, in tanning of leather, for medicinal purposes and also sometimes converted to bio diesel. At Kannur Lake, Seema had found that the Panchayat collects and sells these seeds where the womenfolk would shell away the Honge seeds both alone and as a group. These are traditional practices that strengthens the community feeling and sustainable too.

But is that all that we have lost to urbanization, I wondered. Seema replied to my unspoken question by saying that there is a much subtler yet dangerous side to peopleâs revamped relationship with these water bodies. Lake landscaping aka beautification of our lakes. It sounds like a harmless activity but its implications can be far-reaching and disastrous.

Lake landscaping changes the whole meaning of the lake. From being a living, integral part of local community well-being, it becomes a mere ornament of beauty. The space of the lake is bounded, patrolled by a security guard with entry allowed to public only during certain hours. It is always meant to remain full and brimming with water to create the aesthetically-pleasing picturesque image in our collective urban thinking. While in the past, the local communitiesâ interaction with the lakes ensured its proper health. This collective practice ensured that every local community felt like they were part of the water body, co-existing with it sustainably. On the other hand, the modern method of maintaining a lake is based on restrictive timings and exclusion. This leads to the alienation of the local communities as they are not allowed to interact with their lakes as they have been doing for centuries. Restoration is definitely good but physical changes to the lake, in the process of restoration, can generate unhealthy changes to the traditional view of the lake as a complete ecosystem. It can turn a blind eye towards the significance of wetlands, gentle slope margins and the importance of local community interacting with the lakes.

In our current times, the lake is seen solely as a water reservoir. The restrictive entry timings and access can be harmful to many. Seema points out that the peaceful calm of a lake has seen to relax an autistic child. However, the normal timing of a lake has people bustling in an out causing a lot of chatter and noise which can be inconvenient for the autistic child. In the past, the lake premise also used to function as safe haven for the transgender community who is much stigmatized by the society. But now the lake is fenced off with a patrolling security guard who doesnât allow for such local community gatherings. Though the restrictive timing and access is to avoid vandalism, we have to collectively work towards building a more inclusive lake space.

Seema goes on to say that when we emphasize the lake as a mere water body, we do not realize the multi-purpose values of lakes, the rhythm of the local community and their irrefutable relationship with the water bodies. Landscaping of a lake to fit modern lake ideals kills local community practices and therefore leaving these families bereft of their culture. We forget that such interactions are necessary to form deep bonds with their surroundings and Nature. The lack of our interaction with the lakes indicates the reason behind the prevalent abuse of our water bodies. The fact that we mercilessly destroy our environment is a natural response to the kind of values we follow in our current age where only humans are considered as sentient beings, or beings which deserve the right to live. Even animals donât enjoy that privilege. Back in the past, everyone understood they were part of a whole and that each performed a specific role, and that each part is necessary for the whole society too function â like a spiderâs web.

On a final note, it is good to remind ourselves that not all that is modern is beneficial. Modern lake rejuvenation, for instance, has to be critically understood and tweaked. It is necessary to carefully develop sustainable water management. In our case, we simply have to take a leaf out of the book of local communities and strike a right balance between the past and the present.

We gratefully acknowledge the various inputs and insights provided by Seema Mundoli towards the formulation of this article.